Posted at 10:33h in IT Hardware, IT Software, News by Paul 0 Comments
0 Likes

Windows 10 is free for most people and it is the best OS to date. It is equipped with plenty of new features and applications. The Windows 10 operating system is the next generation in windows OS for all smart devices. This OS is optimized for touch but ideal for mouse and Keyboard users. It will offer the same interface on devices ranging in different sizes. Microsoft made this the most beta-tested product it ever released, being tested by over 4 million people worldwide. The forced updates and the privacy issues are the only things that have a hinder this OS from being perfect. The features and new apps along with the improvements over shadow the new Start menu that might be a bit complicated for some people. The control panel and the separated setting app might also be an issue over shadowed by the greatness of its features.

The Windows 10 start menu contains the standard software and apps. It boasts improvements that may make the Windows apps more useful. The layout of the menu shows the most used apps to the left similar to Windows 7. The apps shortcut is at the bottom along with the shortcut for the file explorer, settings and the shut down and standby. The Windows 8 start screen functionality is kept with resizable tiles for easy access for you to check mail of calendar dates. This menu is also customizable, it can be resized, the tiles can be rearranged, they can also form groups and you have the option to revert to the start of Windows 8. The full screen start menu option was designed for use with mainly tablets but it can be used it with devices without a touchscreen. This OS offers the option to add not only the shortcuts to apps but you can pin tiles to specific functions or features within apps.

The search box is smack dab in the middle of the task bar unlike its predecessors that had it hidden. This was a smart move by the manufacturers that gives this service to you right at your fingertips, literally. The Cortana prompt that you get from clicking the search box is only giving you another way of accessing the search. The search is only a part of the virtual assistant. Cortana offers the choice of voice search, it is much easier to activate the program and tell her your request than typing it. The features of the Windows Phone are also equipped in the Windows 10 so all you have to do is speak or type and your questions will be answered. You can even set calendar dates via this program and even tailor it for specific persons. 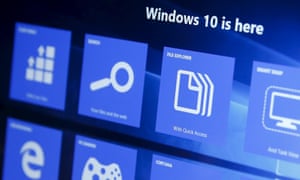 Cortana provides a Daily Glance’ which is a summary of the day’s weather, info about your daily commute, your meetings, sports scores and much more. It also gives you updates of traffic, flight delays and it can even access information from your emails. The program redirects the search to the new Edge browser if it unable to answer your question. This program makes finding important files faster and easier without having to manually imputing or pinning it to task bar.

The task view option will activate by pressing the right of the search box, it has a similar view to what you get when you press ALT+Tab in Windows 7 or 8. This is not the same shortcut for the Task view option in Windows 10, that shortcut is Win+Tab. Below the app thumbnails along the base of the screen is the new virtual desktops bar.

You can access the new style apps directly from in the desktop area unlike the Windows 8.1 OS. This will make the usability of Windows 10 similar to that of Windows 7 to the users. It eradicates the division in Windows on X86 systems. In Windows 10 each screen occupies a quarter of the screen and up to four apps can be snapped to it unlike the single app per screen offered by Windows 8. You will be able to snap apps to fill the entire screen or either side of it.

There is a lot much better option to the pop up notification of Windows 8 boast by Windows 10. It is the equivalent to the action center of Windows 8, it is complete with settings and toggle buttons. The menu bar at the bottom of the screen that hold the toggles for desktop and tablet mode, battery saver mode, Bluetooth, Wi-Fi, rotation lock, flight mode, brightness and location can be expanded or collapsed depending on your need of space.

However, windows 10 does not offer Windows Media Centre, a built in app for music, video and pictures. It was used to handle TV tuners and playing DVDs but these are now absolute so no device is really made equipped with this app. It is probably a good idea not to upgrade to Window 10 if your system relies on Media Center for viewing or recording TV. It is smarter to stick with Windows 7 or 8. There are still options for media playback apps with simple name tags like Music, Movies and TV.

Your One-Drive folder stores the combination of local music and any you have online through the Music app. The Microsoft streaming music service is also integrated by the app. This service Groove, formally known as Xbox Music will give you access by purchasing a Music Pass.

The draw back to this operating system is the options of the Setting app and the Control panel. It is not always clear which one of these apps is used to access certain settings or features. This could be eradicated by putting all those apps in the same folder.

We spoke to Andrew from a london based IT support company RCS, who said:

“Windows 10 has a spyware and privacy issues. It is very convenient how through this cloud focused OS can synced your local accounts like your settings, wallpaper, start menu and other things that can be synced. This option to sync your devices makes it easy for the feature Cortana at full capability and through One-Drive will integrate all your files for easy from any computer phone or other smart devices.”